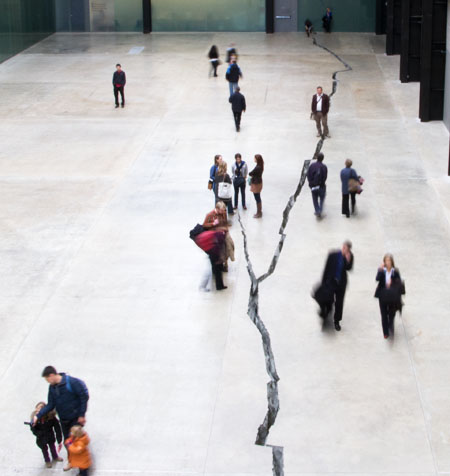 I liked Doris Salcedo’s Shibboleth (above) at the Tate Modern a few few years ago.  Since I couldn’t afford to buy it I decided to get my own with the help of a poorly maintained council owned tree. 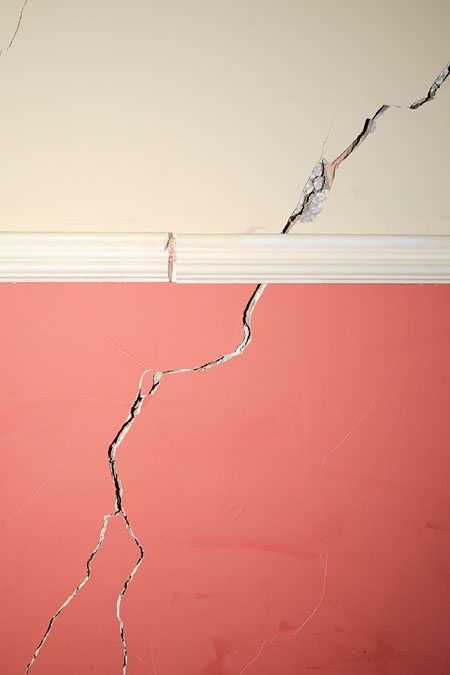 …..once upon a time, about two and a half years ago, we returned from a very pleasant holiday in Corfu.  A few hours after our return our next door neighbour knocked to enquire whether we had any cracks in the party wall.  We replied that no, to our knowledge we did not.  He persuaded us to check and sure enough, behind the TV there was indeed the beginnings of a mini-Shibboleth.  Moving more furniture revealed further cracks along the party wall and indeed on the front bay.  The cracking pattern was found to continue upstairs where it was even better hidden, being at the back of our wardrobe.
“Arse,” and indeed, “Feck!” but strangely not “Drink!” were amongst the words we exclaimed.  It was clearly, to us at first, an issue of subsidence rather than an artistic statement and hence we agreed with our neighbour that we’d both contact our insurers the next day.

The agent contracted by our insurers was on the property within a few days and after an inspection of less than hour concurred that this was indeed subsidence and that it would be covered by our household insurance policy.  So, good news in that it was covered, less good in that, in common with most buildings insurance policies it carried an excess of £1,000 (still somewhat cheaper than the original Shibboleth!)  The most likely cause was thought to be the council controlled tree on the pavement and in an attempt to prove this holes were dug and root samples taken for DNA analysis.
The insurers remained convinced that this tree was the cause with the council being less sure.  Eventually, however, and thanks mainly to our neighbour constantly badgering everyone involved, but still 13 months after the initial sighting of the cracks the trees (there was a second affecting the neighbour’s property) were removed.  In the meantime our cracks were being monitored on a monthly basis to check the movement and indeed, as predicted, once the trees had been removed the crack did begin to close up a bit.  The neighbour’s house was repaired and he moved out sometime last year whilst we awaited the start of repairs.  Our insurers wanted to confirm that movement had ceased before starting repairs which made sense but even so it was only this week that they finally began.

The the plan was that on Monday a removal firm would come and take some of our furniture to a storage depot.  On Tuesday a specialist asbestos removal firm would take down the sitting room ceiling (the artex had been found to contain asbestos, apparently quite common until 20 years ago).  Then on Wednesday the main contractors would begin the repair work.

Yeah, right.  Three different contractors all working for a fourth would be able to deliver on time.

Well, they did……and as I type poor little Shibby 2 is almost certainly an art of the past just like its inspirational mum at the Tate Modern.